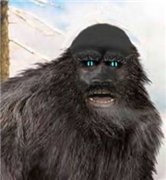 I have found out that there is a bigfoot-like legendary creature called the Chuchuna in Eastern Siberia (that would be north of Outer Manchuria on the map on p28 of The Celestial Empire). Just like the Yěrén, about which I have already posted, the Chuchuna is not a mindless brute but a cunning hominid. The Chuchuna has been described as six to seven feet tall and covered with dark hair. The Chuchuna would hence have the exact same stats as the Yěrén (q.v.), except for the following:
SIZ 1D6+13 (16-17)
Hit Points: 15
Damage bonus: +1D4
Allegiance: Shamanism 10D6

For those who favour TCE-CoC crossovers... notice how 'Chuchuna' and 'Tcho-Tcho' sound similar! I know the sizes do not correspond, but then the Tcho-Tcho are said to have migrated from the Tibet to Southest Asia, so the change in size could reflect their having adapted to a region where competition for food is fiercer.
Posted by 賈尼 at 15:18
Email ThisBlogThis!Share to TwitterShare to FacebookShare to Pinterest
Labels: creature, crossover