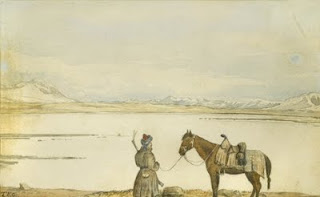 Because of the great distance and of the impossibly high Pamir Mountains, with passes at 4,900+ metres, Bactria (大夏 Dàxià) has had less of a history of contact with China than neighbouring Sogdiana. However, despite these difficulties, relationships have always existed, with a low under the isolationsit Míng dynasty.

Bactria has been mentioned for the first time in records dating from the 3rd century BC. According to these first documents, goods traded between Bactria and China were available all over China (probably through the Silk Road).
The land has been continuously inhabited by various Iranian peoples, including the rather mysterious Yuèzhī and the famous Tokharians, both extinct, followed by the Pashtuns and the Tajiks. Politically, these peoples have rarely governed themselves, being subject to outside invaders: in the 7th century AD, Bactria was conquered by the Arabs, then by the Mongols (the Ilkhanate), then it was controlled by various Muslim successor states (Persian, Mughal, Afghan) until it became the area where the Russian and British spheres of influence met, at the time of the Great Game in the 19th century.

See p28 of The Celestial Empire for the location of Bactria.
Posted by 賈尼 at 10:44
Email ThisBlogThis!Share to TwitterShare to FacebookShare to Pinterest
Labels: background, geography