I haven't posted for a long time because I'm pretty busy these days. I tend to try and favour personal research for my Celestial Empire posts, so I'd rather keep quiet for a while than post uninteresting stuff.

However I really feel I have to post something now. Posting about the Brocade Guards (Jǐnyī Wèi 錦衣衛) of the Míng emperors has been on my to-do list for quite some time now. Unfortunately I really haven't been able to do any personal research, so the following is mostly a summary from the Wikipedia. 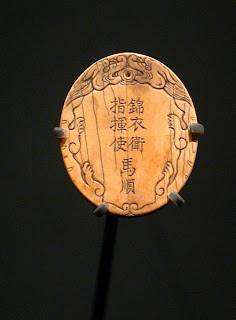 The Jǐnyī Wèi (錦衣衛; literally "Brocade-Clad Guard") was the imperial military secret police of the Chinese emperors of the Míng Dynasty and were bound to serving the emperor only, and to taking orders from him only. The Jǐnyī Wèi was founded by the Hóngwǔ Emperor in 1368 to serve as his personal bodyguards and it developed into a military organisation the following year. They were authorised to overrule judicial proceedings in prosecutions, with full autonomy granted in arresting, interrogating and punishing anyone, including nobles and the emperor's relatives.

The Jǐnyī Wèi were also tasked with collecting military intelligence on the enemy and participated in battle planning stages. A Brocade Guard donned a distinctive golden-yellow uniform, with a tablet (pictured) worn on his torso, and carried a special blade weapon.

In 1393, the Hóngwǔ Emperor curtailed the Brocade Guards' powers after they allegedly abused their authority during the investigation of a rebellion plot, in which about 40,000 people were implicated and executed. When the Yǒnglè Emperor ascended to the throne, he was afraid that his subjects might be discontented with him, because he came to power by usurping his nephew's throne. He reinstated the Brocade Guards' authority to increase his control over the imperial court.

In the later years of the Míng Dynasty, the Brocade Guards were placed under the control of the eunuch faction. As the government sank into corruption, the Jǐnyī Wèi was constantly used as a means of eliminating political opponents through assassinations and legal prosecution.

The Jǐnyī Wèi was eventually disbanded by the Qīng in 1644. 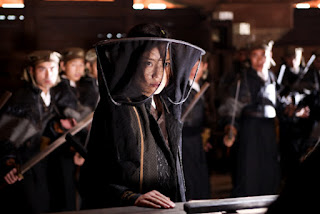 The Jǐnyī Wèi feature prominently in fiction set in the Míng. The 2010 film 14 Blades focuses on the adventures of a group of ninja-like Brocade Guards.

Scenario seed: Both a judge and his retainers, and a grup of brocade guards are after a corrupt official. The former want to arrest and publicly try him, the latter simply want to eliminate him. The PCs are in either group and must fight both the corrupt official's bodyguards and the other party.
Alternatively, two groups of PCs could compete with each other (this would need two GMs).
Posted by 賈尼 at 23:34
Email ThisBlogThis!Share to TwitterShare to FacebookShare to Pinterest
Labels: background, history, Ming, scenario seed