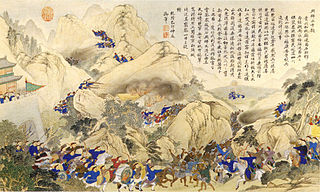 Amongst the various tribes of south-central China, the Miáo (or Hmong) have always been one of the most troublesome for central government. As such they are very present in Chinese myths and legends, much more so than other mountain peoples. There are countless accounts of Miáo rebellions, followed by harsh repression campaigns by the various Chinese dynasties, the worse being the devastating massacres organised by the Qīng in the second half of the 19th century. No wonder that, in time, the Miáo have slowly moved southwards from their ancestral home in south-central China to South-East Asia.

The following is a very evocative excerpt from the book Hmong and American: stories of transition to a strange land by Sue Murphy Mote (2004).

The Hmong were furious fighters. Since Shāng times their abilities had been sharpened by the need to defend what they desperately considered theirs. Guìzhōu Hmong, those against whom the Míng built the ten-foot high Hmong Wall, dressed themselves in armour made of buffalo hide, copper, and iron mail. They carried a shield in one hand, a spear in the other, and a knife in the teeth. Crossbows and poisoned arrows rounded out the arsenal. In the late 1600s, a Chinese factional general multiplied the power of the Hmong juggernaut immeasurably when he left behind in a Hmong village some flintlock rifles, gunpowder, and cannons. Another Chinese general, whom the Hmong had sheltered, showed the Hmong how to manufacture their own flintlocks, or blunderbusses, an item used in colonial America around the same time. Hmong made them by the thousands.
At the same time, Hmong began breeding mountain ponies for war. These animals, able to race up and down mountainsides, were regarded by the Chinese as the best horses in the empire.


The "Hmong Wall" mentioned above was like a miniature version of the Great Wall, one hundred-mile long, ten-foor high, and with watchtowers manned by armed guards that the Míng had built in the 16th century. This wall was to contain the Miáo within a given territory, where the Míng troops would foray to capture boys to be mass castrated and turned into eunuch slaves. This territory had the worse lands whereas the best arable lands were given to Hàn colonists. Some of the colonists (mostly Hàn soldiers who crushed the rebellion) would also be given Miáo wives.
Posted by 賈尼 at 15:58
Email ThisBlogThis!Share to TwitterShare to FacebookShare to Pinterest
Labels: background, Ming, Qing