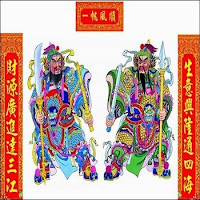 The Chinese New Year is the occasion for all Chinese to tidy up their homes, throw out old objects, buy new shoes and new clothes, and, most importantly, to remove the worn-out pictures of the Door Gods and to replace them with brand new shiny ones. See also p13 of The Celestial Empire.

The two pictures of the Door Gods (ménshén 門神) are placed on each side of the main entrance to the Chinese home and stand guard there for a full year to keep away evil spirits. The pictures face each other — it is considered bad luck to place them back-to-back.

Scenario Seed: Save the New Year!
The characters are resting in the city of [city name] before the Spring Festival. They are in the city magistrate's employ, or owe him a favour. They are summoned to the city yámén in the night before New Year's Day by a close retainer of the city magistrate. This is very unusual, since even civil servants are supposed to be off duty and celebrating with their family on New Year.
The magistrate receives them in casual dress... this is even more intriguing. He explains them that the situation is so urgent that he forgot about behaving properly. May Confucius forgive his misbehaviour. The whole stock of Door Gods prints that the city printer had prepared for distribution the next day has been stolen! The characters must absolutely find a solution or the whole city will go in panic mode once the disappearance of the good luck-bringing posters becomes public!

The characters may suggest...

Possible courses of action: the PCs could try and find paper somewhere (didn't that Buddhist abbot want to print out the Dàzàngjīng?), or they could try and a find a means to travel faster (isn't there a Daoist hermit in the mountains who can travel 500 lǐ in a day?). The best idea, however, would be retracing the thief. He's currently on the river bank, waiting for a boat that will take him to a city downstream where he's planning to sell the images.

Possible consequences should the PCs fail: Panic spreads through the city. Ne'er-do-wells and thieves take advantage of it to commit burglaries. The following days, having had word of the situation, brigands raid the city. In a campaign game with supernatural elements, the city could even fall prey to demons or yāoguài.

Posted by 賈尼 at 21:12
Email ThisBlogThis!Share to TwitterShare to FacebookShare to Pinterest
Labels: background, scenario seed