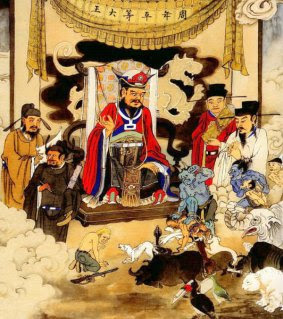 In ancient Chinese religion the Underworld was called the Yellow Springs (Huángquán 黄泉) — possibly a reference to the ubiquitous Yellow River. The Yellow Springs were not a ‘hell’ where one suffers retribution but rather a place where the souls of the departed were supposed to reside, the destination of the whitesoul (pò 魄). Life could be made easier for the pò if it was provided with the necessary amenities: food, clothing, money, precious objects, and servants. These would be placed in the tomb by the surviving relatives. The servants (human and animal) were at first provided by immolating the actual servants of the deceased in the tomb, but with time (during the first half of the first millennium BC) this practice ended and inanimate representations of the attendants were placed in the tomb instead.

Anything more precise as to the exact ancient conception of the underworld is lost, as the surviving texts from Chinese Antiquity have been written by Confucianists who have generally ridiculed the ancient myths.

Under the Hàn, the God of the Eastern Mountain (Mount Tài: Tàishān 泰山), the abode of the xiān 仙, starts being held responsible for the register of the living and the dead; as a result, the idea that the dead reside under Mt Tài starts spreading. Concurrently with Mt Tài in Shāndōng (山東), a temple in Fēngdū 酆都 in Sìchuān (四川) also starts being considered as the entrance to the underground realm of the dead.

Under the influence of Buddhism, Chinese folk religion eventually includes a fully-fledged place of subterranean torment called Dìyù (地獄). In Dìyù, the souls of the dead undergo judgement through the Ten Courts of Hell, each of which is ruled by a judge; the ten judges are known as the ten Yāma Kings (Yánwáng 閻王). The judge of the first court weighs the good and bad actions of the dead spirit, and decides whether it must undergo the nine other judgements or not. Then each of the subsequent courts deals with a different aspect of atonement and different punishments. Particularly meritorious dead spirits get direct access to the Silver Bridge that yields access to a position in the Celestial Bureaucracy, or to the Golden Bridge that yields rebirth in one of the upper realms.

The Ten Courts of Hell are:

When one's torments in the City of Ghosts are over, the whitesoul is summoned to the Tenth Court, where Lord Xuē decides the manner of one's next existence. Then Mother Mèng (孟婆) administers the Tea of Oblivion, which erases one's memory and ensures that all the punishments are forgotten. The dead spirit is now ready to be reborn in a new earthly incarnation.
Posted by 賈尼 at 15:25
Email ThisBlogThis!Share to TwitterShare to FacebookShare to Pinterest
Labels: background, religion