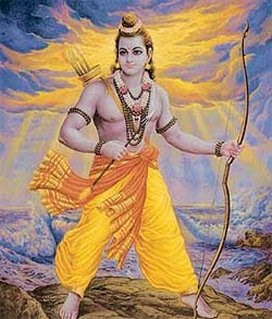 Asura are potent creatures from Vedic mythology: demonic and titanic spirits that are opposed to the Deva (the Indian gods), and in particular to Indra. There are four kinds of Asura, depending on their birth: born out of an egg, out of a womb, out of magic, out of water. Asura live deep in mountain caverns, in the underworld, and in the nether regions where the Asura architect-magician Maya has built them huge cities. Asura also live in the sea that surrounds Mount Sumeru.
In Buddhism, the Asura realm is the lowest of the six domains of rebirth. However the Asura are generally depicted as less evil than their Vedic counterparts; their behaviour stems from their karma: it is assumed that rebirth into an Asura is the consequence of having been a human being obsessed with force and violence, always looking for an excuse to get into a fight, angry with everyone and unable to maintain calm or solve problems peacefully.

Asura as creatures for a Celestial Empire game are described on p123 of the rule book. Depending on their birth, Asura may be further characterised as follows:

Egg-born Asura inhabit the flying fortresses that circle Mt Sumeru. They have huge bird-like wings which they use to glide down from their flying fortress when attacking the sky-realm of the Deva.
Womb-born Asura mostly live undergound. They are known for their armour and weapons, and in particular for their superior bows. They are mortal but their lifespan is still immeasurable by human standards. They are the most likely to strive for a better rebirth and hence lend an ear to Buddhist preaching.
Magic-born Asura shun the use of armour and weapons and prefer concentrate on the use of spells.
Water-born Asura are the most wicked ones. They have a craving for alcoholic drinks.