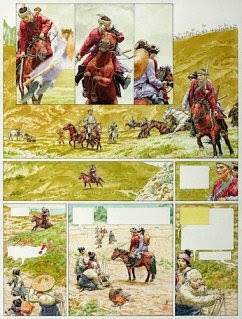 OK; this comic book series is Belgian but still written in French. Apparently it's been translated to German but never to English. The author, Vink, was born in Vietnam but has lived in Belgium for the past 50 years or so. Still his comic books are almost always set in East Asia or in Southeast Asia and drawn with an obvious passion for that region.

The comic book series is actually made up of two consecutive series: Le Moine fou, in 10 volumes, and Les voyages de He Pao, in 5 volumes.

The stories are set in the Sòng dynasty, a troubled time for China — but then a perfect time for an action-packed comic book. The main character of both series is the orphan girl He Pao [Hé Bǎo 河寶], a martial artist raised by Buddhist nuns and intent on discovering the origins of the incredibly efficient wǔshù that she has been taught, and who her true parents were.
Posted by 賈尼 at 15:14
Email ThisBlogThis!Share to TwitterShare to FacebookShare to Pinterest
Labels: miscellaneous